Artists are arrogant people. Selling their works to get by in life, artists rarely switch off their mental working state; they are always looking for subject matter for their works.

Artists are lonely people. Production of their works is almost always done alone. Without expectations for those who view their art to have a perfect understanding of the work put into the piece, they work on, in hopes that even just one person will understand the piece’s meaning. That’s why it’s important for artists to find a person that they can call a partner. By adding a fresh point of view to their own complacent production, the puzzle pieces will finally come together, clearing the image and bringing things into view that could not be seen previously. On top of that, just having someone who understands the process and the pain associated with the process can bring peace of mind.

Here, Kei Imazu and Daisuke Fukunaga are painters representative of the 2000s. Imazu and Fukunaga are affiliated with the Yamamoto Gendai Gallery and Tomio Koyama Gallery, respectively. Sharing a studio located in Sagamihara in Kanagawa Prefecture, the two painters share in the pleasures and pains that come along with oil painting on canvas. 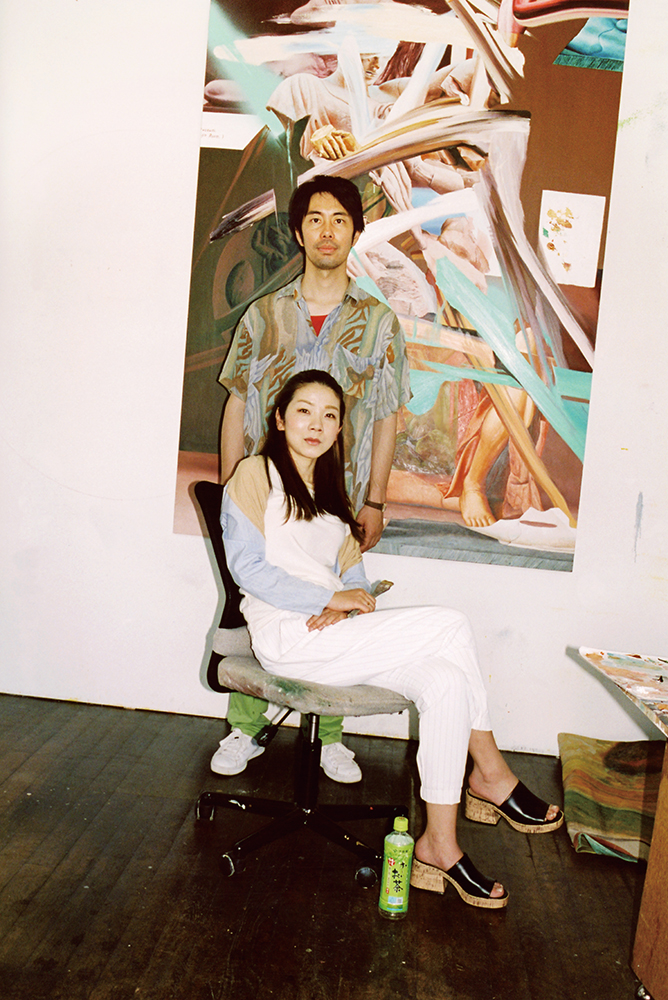 Is it troublesome to share an atelier with the other artist?

Kei：  I think Fooki had it more difficult. As for me, although I don’t want to be disturbed when I’m thinking about things, I don’t mind a little background noise when I’m painting. Sometimes the music that Fooki plays is just annoying though. He really likes to play discomforting, creepy music.

Kei:  He plays is super loud.

Daisuke:  Sometimes Kei likes to put on some debate programs as well.

Kei：  Let’s not talk about that (laughing).

Daisuke:  I wonder why that is?

Kei：  I get the feeling that I’ll just sort of float away when I’m painting. I mean, it’s not like you can read a book while you’re painting. I just think that it would be nice to know what’s going on in society through radio programs and stuff like that.

Daisuke:  The other day, I also painted while listening to an audiobook on CD.

Daisuke:   It’s really a great story, but it might be a bit difficult to listen to while working…

Do you have the right to play music in the studio, Imazu?

Kei：  Of course. The early bird catches the worm. However, we do have the rule that we can stop it if it becomes uncomfortable.

You guys are working together in the same group, not only as artists but as painters. Unlike other jobs, it’s a world in which you can’t place blame on others. Is there every any jealousy between you two?

Kei：  Although Fooki could be placed in the same category as a painter, we can’t really compare ourselves because the work we’re doing is completely different. On top of that, because of our extremely close relationship, I don’t really think there’s room for jealousy.

Daisuke:  How about artists of the same generation?

Kei：  I don’t think I’ve ever really felt jealousy or a sense of aversion with other artists either.

Daisuke:  Why do you think that is?

Daisuke:  I think I would be lying if I said no. To be honest, I think everyone has been jealous of somebody sometime. Rather, I think that’s actually more natural. For example, if Kei’s pieces are selling better, I’m always looking at in what way they’re being sold, searching for something that her works have that mine don’t. Just like she said before, there are times when somebody has a completely different style of work. I sometimes get jealous or envious of their talent.

Daisuke:  Since there isn’t really a sense of darkness in Kei’s pictures, I sometimes felt jealous of the feeling that comes over into my mind. Because it’s something I can’t do with my works.

Let’s talk about your works. Starting with Fukunaga- it seems that you’ve had a familiar style since university, scenery that you’ve seen with your own eyes, a lot of which comes from the Sagamihara area your studio is in. How did you get started with this style?

Daisuke:  That’s right. Some time ago, I was caught up in the meaning of the word reality. Everyone has their own personal perspective for what reality is; at times it was my own personal thing, something I had a feeling about, or something that I had experienced. I became interested in how people come to view landscapes that they see on a normal basis, and everything started from there. Things like a mop or tire… Those are the types of things that come together with all sorts of memories to become the motif for a picture.

And Imazu, what does reality mean to you?

Kei：  Although it might be a little bit more convoluted than Fukunaga, I also tend to use the things around me as subject matter.

Daisuke:  Your motifs that you found on the Internet are that way, too.

Kei：  In my case, I’m more interested in the structure of why the things in front of us, and why the sights we see with our own eyes are considered to be real. That’s my reality. For example, I think that buying a Buddha statue that came from the anti-Buddhist movement or getting a hold of an old material that was part of a supporting material is the same as finding an image on the Internet, gathering materials at a library, drawing a picture on a computer, or using a brush and paints. I try to keep in mind creating something of a universal theme in a way that can only be created in the current day and age.

For example, you mean causing an error or something using brush strokes?

Kei：  That’s right. The first iMacs were just released when I was a student. This was when everyone was using Photoshop to edit photos, and everyone was able to make videos by themselves. While everyone is doing these things, I decided to date to take a perception that anyone can have and make it my own. To me, tracing back like that is what it means to realize something.

It seems like you both have two very different perceptions of reality. With both of you sharing the same studio, are there ever cases in which one of you helps out the other?

Kei：  Not really. Occasionally we might offer each other opinions about the other’s art, but that’s about it. There will be times, when walking down the street for example, where I’ll encounter something that reminds me of one of Fooki’s pictures. I would probably take a picture of it to send to him.

Daisuke:  That’s true- you’ve sent me a few pictures before haven’t you.

Kei：  I’ve never actually seen him use one though…

Daisuke:  I do have them stocked as memories though. But, how do I say, the way that the person took the picture… I also take pictures, and I really like the ones that are like straight photographs. The reason for this is that pictures themselves are like the person’s exact perspective became a work of art. I believe there are as many different perspectives as there are people out there. I guess you could call it a perspective. I like seeing those sorts of things. It’s possible to see all sorts of different aspects about the world just through peoples’ perspectives. Even the pictures that Kei sends me – to her, they are pictures that remind her of me. But somehow Kei’s perspective is also in that picture, so it’s really interesting.

You think artists should be lonely?

Daisuke:  I think artists will always be a lonely existence. While maybe only superficial, just having a partner can help alleviate the loneliness.

Kei：  That’s right. I don’t think there’s enough that can be said about that indiscriminately closed feeling. This is because you’re not necessarily bound to techniques and concepts that can be easily conveyed to the masses. In a sense, what people end up seeing is only the finished result. It’s really important to have someone by your side like a gallery or Fooki, someone who understands the process up until completion when explain it to them.